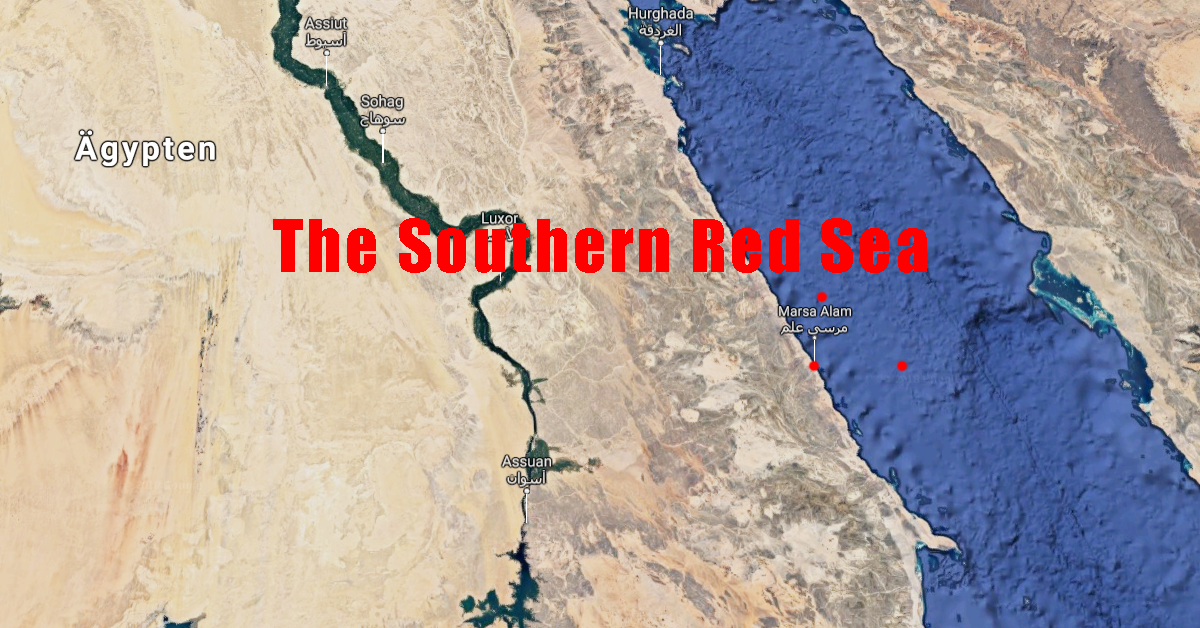 The southern area of the Red Sea is not that popular yet and therefore it offers less crowded dive sites. In turn, the difficulty of the dives is a little higher than in the north. The south of the Red Sea provides mainly incredible encounters with big animals such as sharks, mantas, turtles, dolphins etc. You’ll find great visibility and walls where depth seems infinite. The south is nowadays claiming a place in the world map of diving destinations.

Drift dives, crystal clear visibility, great depths…the south side of the Red Sea offers dream-like conditions for divers. The diving here is done mainly from liveaboards as the destinations are usually quite far away from the coast. Most divers that flock here do so to get some distance from the crowded resorts of the north.

Don’t forget to read our article about The Northern Red Sea!

The diving in the Red Sea offers encounters with whale sharks, hammerheads, silver tip reef sharks, tresher sharks, manta rays, turtles, napoleons, barracudas, dolphins amongst millions of fish and stunning walls full of healthy soft and hard corals. One of its biggest attractions for divers is the possibility of spotting the rare oceanic white tip shark. Since it is a pelagic animal, the oceanic white tip reef shark is on and off the reef. Therefore you should better be attentive to the blue while diving. Wouldn’t you like, out of a sudden, to be surprised by the appearance of a great dark shadow?

Marsa Alam is a city located on the west coast of the Red Sea. The inauguration of the Marsa Alam International Airport in 2003 has helped in the tourism development of Marsa Alam. Nowadays it’s the start point of mostly all the liveaboard companies operating in the southern Red Sea. Marsa Alam became more and more popular over the years and it claims to be the region with the best diving of all the Red Sea. Although there is a possibility to go diving in daily excursions, there are many liveaboard tours available. Most of the dives are done in stunning underwater walls with strong currents and visibility that can reach up to 60m.

The waters of Marsa Alam host silver tip sharks, grey reef sharks along with the desired oceanic white tip, turtles, bottle nose dolphins, spinner dolphins, barracudas, tunas and an incredible variety of corals and colourful fish. This makes it an offer difficult to reject, it’s a temptation. On top of that, from may to august, the elegant giant whale sharks and the majestic manta rays stroll through the blue. This might be the “one in a lifetime” chance to dive with such beautiful critters.

It is easy to spot barracudas in the Red Sea. This awesome animals are very curious and can come really close to divers.

Located only 7 miles away from the coast, you can get here with a daily excursion from Marsa Alam or by liveaboard. The reef, that at its peak reaches 1m of depth, offers impressive diving at all depths through wonderful walls crowded of life. In this place encounters with oceanic white tip sharks are more frequent. Its beauty though lies in the gardens of soft corals, its banks of fish in addition to the typical fauna of the Red Sea. Some dives are quite deep, such as the Sarcophagus Archway, a 56m deep rock formation in the shape of an arch that will not leave you unchanged.

Accessible only by liveaboard. These two islands, located in the middle of the Red Sea, will surely delight any diver. Each island is separated from the other one for a trip of 5 minutes by boat. It is impossible to say which of the two offers the better diving. They are protected as aquatic parks and there are periods during the year in which the authorities deny access to the divers. The rest of the year it is obligated to pay a fee of 5 dollars per diver and day to help to maintain the natural park.

Here you’ll find forests of giant gorgonians hanging from walls that fall into infinity and healthy corals as they can hardly be found in any other part of the world. This is the scene in which sharks, turtles, barracudas, tunas and massive shoals of fish make their daily performance. Definitively, the Brother Islands are a must destination for any diver visiting the Southern Red Sea.

Although the main attractions of the Red Sea are large fish, there are many possibilities for underwater photographers.

Located about 45 nautical miles south of Marsa Alam and only accessible by liveaboard. The natural park, slightly less visited by boats, offers dives full of predatory action. Due to its strong currents the diving here is quite demanding. Reserved only for advanced divers, but well worth of it. Schooling hammerhead sharks frequent the area in conjunction with turtles, napoleons, trevallies, tunas, barracudas and occasionally thresher sharks. During the summertime it is common to see also manta rays. Another attraction are the anemone gardens with their ever present anemone fish and dottybacks. As well you will be surrounded by incredible coral formations, huge amounts of cleaning stations and the common thousands of colourful fish found all over the Red Sea.

Definitely the Red Sea possesses many natural wonders that are worth going to visit. Hence its fame is spreading more and more and it is awarded as a world class diving destination.  Now you have a few good reasons to add the Southern Red Sea to your bucket list!